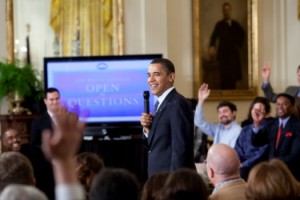 President Obama, in his first online “Open for Questions” town hall meeting on Thursday, March 26, 2009,  provided an online venue for the citizens to ask the burning questions about the economy that are keeping everyone awake at night.

Missed it? Nearly a hundred thousand people participated, and more than 3.5 millions voted.  President Obama answered the most popular questions.

Have no fear, you can still watch the entire video (check out our featured video) or watch @ the WhiteHouse.gov site.

Here is a little sampling that we find interesting:

DR. BERNSTEIN: Next we have a video question from Harriet in Georgia about bringing jobs back to America: “Hello, President Obama. Here is my question for your online town meeting. When can we expect that jobs that have been outsourced to other countries to come back and be made available to the unemployed workers here in the United States? Thank you so much for all your hard work. God bless you. Bye-bye.”

THE PRESIDENT: Well, I appreciate that. Let me talk more, first of all, broadly about what’s happening in the job market. We have had just a massive loss of jobs over the last several months, the kind of job loss we haven’t seen at least since the early ’80s and maybe since the 1930s, in terms of how quickly we’ve seen the economy shed jobs.

A lot of that is prompted by the financial crisis and the locking up of the credit markets. And that’s why when we are — when we talk about dealing with this credit crisis and the banks, I just want everybody to understand it’s not because we’re overly concerned about Wall Street or a bunch of CEOs; it’s because if we don’t fix credit, if we don’t get liquidity back to small businesses and large businesses alike who can have that — use that line of credit to buy inventory and to make products and sell services, then those businesses shrivel up and they start laying people off.

Ultimately, our measure of whether we’re doing a good job or not is, are we going to be able to create and save jobs? And part of that involves fixing the financial system.

There is a long-term issue, though, that we have to deal with — and this was true even before the current crisis — and that is that so much of our economic activity was in the financial services sector. It was related to an overheated housing market. It was dependent on huge amounts of consumer saving. And we were seeing those steady declines in manufacturing. We were seeing steady declines in a lot of other productive sectors of the economy. And one of the things that my budget is designed to do is, by fixing our education system, by reducing costs of health care, by going after the clean-energy jobs of the future, trying to put our economy on a more solid footing.

Now, a lot of the outsourcing that was referred to in the question really has to do with the fact that our economy — if it’s dependent on low-wage, low-skill labor, it’s very hard to hang on to those jobs because there’s always a country out there that pays lower wages than the U.S. And so we’ve got to go after the high-skill, high-wage jobs of the future. That’s why it’s so important to train our folks more effectively and that’s why it’s so important for us to find new industries — building solar panels or wind turbines or the new biofuel — that involve these higher-value, higher-skill, higher-paying jobs.

So I guess the answer to the question is, not all of these jobs are going to come back. And it probably wouldn’t be good for our economy for a bunch of these jobs to come back because, frankly, there’s no way that people could be getting paid a living wage on some of these jobs — at least in order to be competitive in an international setting.

So what we’ve got to do is create new jobs that can’t be outsourced. And that’s why energy is so promising. We’ve been talking about what’s called a smart grid, and some of you may have heard of this. The basic idea is, is that we’re still using an electricity grid that dates back 100, 150 years ago. Well, think about all the gizmos you guys are carrying — (laughter) –all the phones and the BlackBerrys and the this and the that. You’re plugging in all kinds of stuff in your house. We’ve got an entirely new set of technologies, huge demands in terms of energy, but we’ve got a grid that’s completely outdated.

Now, one of the things that we wanted to do in the stimulus package was to go ahead and start laying a new grid. And to do that, it’s like building the Transcontinental Railroad. You’ve got a — it’s a huge project involving all 50 states.

The benefits of the grid are that we could reduce our energy costs by billions of dollars. We could set up systems so that everybody in each house have their own smart meters that will tell you when to turn off the lights, when the peak hours are, can help you sell back energy that you’ve generated in your home through a solar panel or through other mechanisms. If we get plug-in hybrid cars, you can plug it in at night and sell back electricity to the utility, and then charge up your car again in the morning before you leave.

All this can be done, but it also creates jobs right now. Our biggest problem, we don’t have enough electricians to lay all these lines out there. And these are jobs — these are union jobs that potentially pay $80,000-$90,000 a year, with benefits. But it’s a matter of making the investment in infrastructure and also then training the workers to be able to get those jobs. And that’s where we’re going to be focused on. That’s where the job growth is going to occur.

One last point I want to make — and I know I’m not supposed to talk this long, but we’re going to have to be patient and persistent about job creation because I don’t think that we’ve lost all the jobs we’re going to lose in this recession. We’re still going to be in a difficult time for much of this year. Employment is typically what’s called a lagging indicator. Now, this is — Dr. Bernstein, he’s a Ph.D. economist, so he’ll correct me if I’m wrong here, but —

DR. BERNSTEIN: I’m sure I can make this really confusing. (Laughter.)

THE PRESIDENT: But historically, if you look at every recession, what happens is that when the economy starts getting in trouble, it takes a while before businesses decide, you know what, this economy is in trouble, it’s not bouncing back — we better start laying off workers. So what we’re seeing now is a lot of businesses have decided that our sales are way down, we’ve got to start shedding workers. And that’s going to continue for a while.

Now, the reverse is true, as well. When the economy starts recovering, when these businesses start being a little more confident that, you know what, we think we’ve bottomed out; the recovery package President Obama passed gives us some optimism about making investments in certain areas — it takes a while before they start hiring even if they’ve started to make these investments.

So the reason I point that out is, I don’t want people to think that in one or two months suddenly we’re going to see net job increases. It’s going to take some time for the steps that we’ve taken to filter in. The fact that the housing market is starting to stabilize a little bit — there’s still a lot of inventory out there before people then actually start building new homes. At some point people are going to start buying new cars again, but it’s going to take a little bit of time for the automakers to get back on their feet.

So employment is something that we’re going to have a difficult time for the next several months, maybe through the end of this year, but I’m confident that we’re taking the steps that are required to create these new jobs of the future.

DR. BERNSTEIN: After the last recession ended in 2001, the unemployment rate went up for another 19 months before it started coming back down.